Launched in October 2018 by Ecosurety and Hubbub, #LeedsByExample has brought together a unique coalition of 25 national partners who are funding the scheme, plus 29 local partners including Leeds City Council, to boost recycling of some of the most common food and drink packaging consumed on-the-go. The groundbreaking six-month trial in Leeds has doubled the number of people recycling plastic, cans and coffee cups and has recycled 600,000 cups in less than six months.

The initiative aims to ensure all plastic bottles, cans and coffee cups collected are reprocessed in the UK and as locally as possible. In Leeds, cans are being reprocessed in Cheshire, plastic bottles in Lincolnshire and cups in Cumbria. Hubbub will be exploring local solutions for the two new cities.

The model will now be rolled out in Swansea and Edinburgh from September this year, building on what has been learned in Leeds to increase recycling levels in those cities. An extension in Leeds city centre will also increase the number of on-street recycling bins, introduce more cup collections and further engage the local business community.

Key results from the trial show the proportion of people disposing of plastic, cans and coffee cups in a recycling bin almost doubled from 17% to 32%. In addition to the significant numbers of coffee cups recycled, 65,000 cans and 55,000 bottles were also recycled during the six month period. 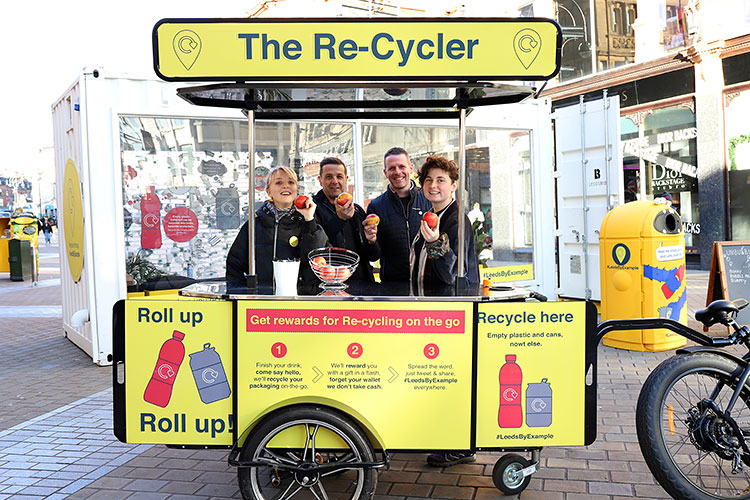 The campaign grabbed the public’s attention with brightly coloured recycling bins, bins that burp and blow bubbles when items were disposed of, a giant coffee cup installation and a ‘Re-Cycler’ recycling collection bike which were positioned in various locations including universities and shopping centres. Polling showed that 82% of the public in Leeds City Centre had seen the campaign.

Key learns from the campaign

A number of factors have become apparent after the six-month campaign that will be used to try and further improve recycling. These include: 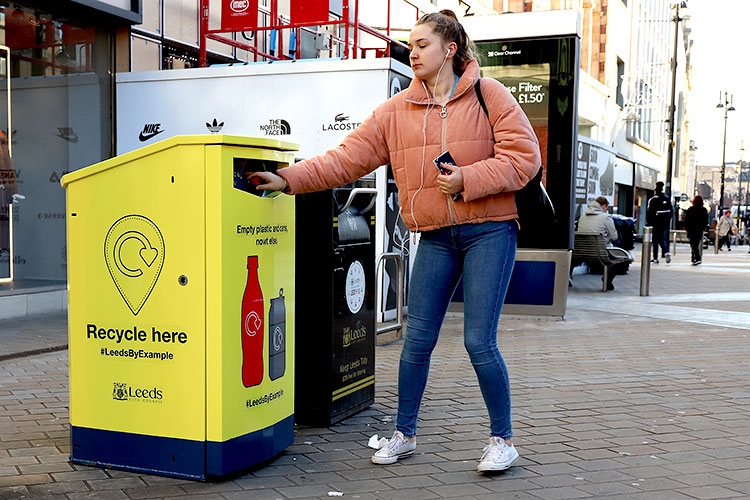 James Piper, CEO of Ecosurety commented “Not only has the Leeds By Example campaign provided some valuable insights on how we can successfully implement on-the-go recycling infrastructure, it has shown that leading brands and retailers now recognise the vitally important role that consumers play in our recycling system."

"Collaboration and education are critical components to an effective recycling process - Leeds By Example shows us why. We are delighted with the outcomes of Leeds By Example and look forward to working with Hubbub to develop the campaign further in Edinburgh and Swansea later this year.”

Start of a wider ambition

Gavin Ellis, co-founder and director of Hubbub commented “When it comes to recycling the packaging we all use, too often the onus is on local authorities to tackle this issue alone. The success of Leeds By Example shows what can be achieved when partners work together to share expertise, grab public attention and change behaviour. Lack of infrastructure and unclear messaging is a major barrier to recycling in the UK, and results from our trial have shown the importance of new recycling bins supported by a clear, concise call to action."

“We’re thrilled with the campaign’s success so far and it’s the start of a wider ambition – to create a legacy for Leeds and a tried and tested replicable model for other cities to follow. We’re already looking forward to rolling out the campaign to Edinburgh and Swansea in September and we encourage other cities to get in touch about the possibility of launching in their area in 2020.”

Councillor Mohammed Rafique, executive board member for active lifestyles and the environment at Leeds City Council commented “It’s great to see the Leeds by Example trial has seen numbers of people recycling on-the-go double in just the space of six months. The message is clearly getting across to people and the various city centre recycling options and incentive machines have been widely used. We are hearing great things from people across the city which is why we are very pleased to see the extension of the scheme to include even more opportunities for recycling in our city centre.” 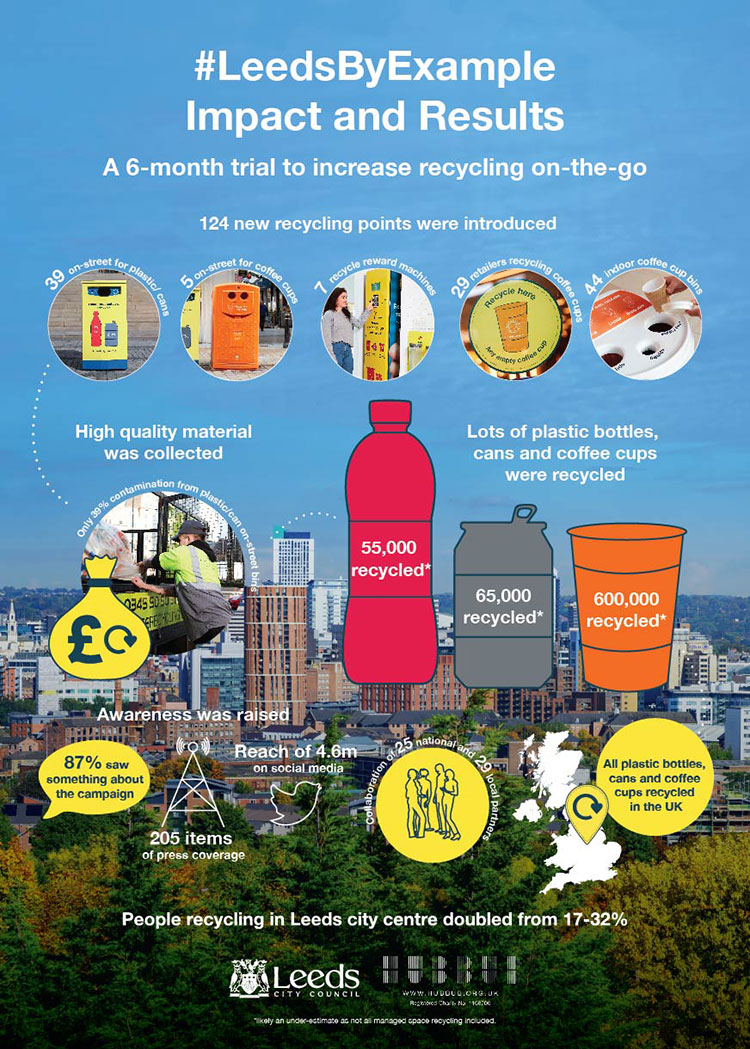 Want to get involved?

If you would like to find out how you can be involved in these recycling on-the-go initiatives, please contact our team.

Ecosurety is the market leading compliance scheme investing in quality recycling. With more than 1,000 customers including Nestlé, The Co-operative Group and Virgin Media, Ecosurety supports efficient and more transparent investment in UK recycling projects via infrastructure, innovation and consumer awareness campaigns. Committed to reducing the environmental impact of UK businesses, and to a tangible increase in UK recycling, Ecosurety helps producers organise quality evidence to ensure they comply with packaging, WEEE, batteries and international regulations.
www.ecosurety.com 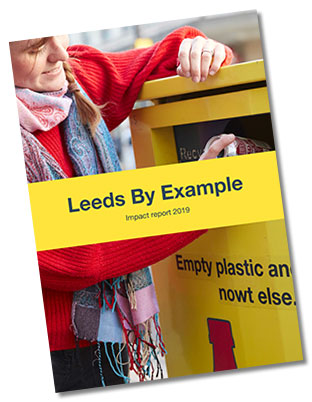