The circular economy - what are the economic and business benefits?

The ideas surrounding the circular economy have been ruminating across Europe for two decades now.

As is the case with most environmental legislation, publicly it is portrayed as having great environmental benefits (cleaner air and cleaner streets) - but this can be contrasted elsewhere with speculation about negative effects on business or the economy.

So what are the economic and business benefits of the advancement of a circular economy? For the purpose of this blog, we'll focus on the wider macro-economic arguments.

A move towards a circular economy can help companies reduce costs and stabilise their supply chains over the long term, to help reduce manufacturing and running costs. This could benefit manufactures for example by allowing them local access to the raw materials needed to manufacture their goods.

A circular economy would also require a reduction in the transportation of waste, as transportation adds little value and increases the carbon footprint of recycling. Extended Producer Responsibility (EPR) has been floated as a potential policy framework for solving this problem.

The Environment Services Association’s 2016 white paper, Delivering Sustainable Growth, calls for policy change in EPR to link the raw material needs with the waste output of the economy at local and national levels. They conclude that the current waste output from industry often does not match the requirements of the producers’ supply chain. Creating incentives for producers to engage in recovery systems that meet their own requirements could both lower the burden on local government and improve the quality of the secondary materials such systems produce.

Resources are scarce. This year we passed Earth Overshoot Day (the point in the year when we used an entire years’ worth of the planet's renewable materials) earlier than last year. In fact we’ve lost almost a month since 2000. This is a clear indication that developed economies cannot continue down the path they are on. Resource scarcity will become a top priority of UK boardrooms, embracing and shaping policy that ensures national economies have the resources they require through end-of-life resource capture, rather than primary raw material excavation, being a necessity.

Friends of the Earth estimates that meeting the 2025 EU recycling targets of 70% could create a net of 51,400 new jobs in the UK economy with a further 20,000 potential jobs, if we broadened the target to include Commercial and Industrial Waste (C&I).

WRAP concludes that this could span between 54,000 – 102,000 net jobs by 2030 dependent upon our current development path or increasing our commitment to the circular economy. WRAP also concludes that these jobs could be targeted in areas where unemployment is higher (see the infographics below produced by WRAP) and this could help the UK slow the rate of skilled employment loss over the next decade. 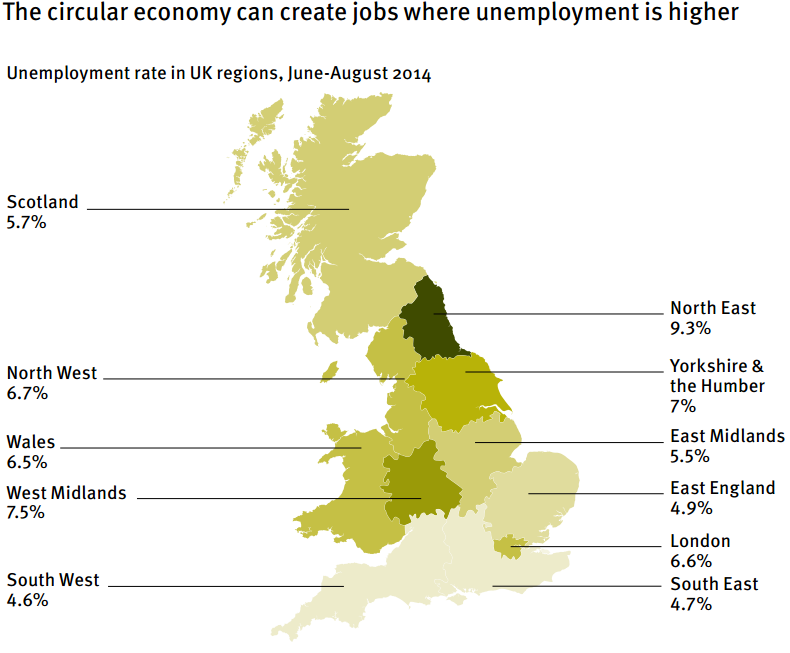 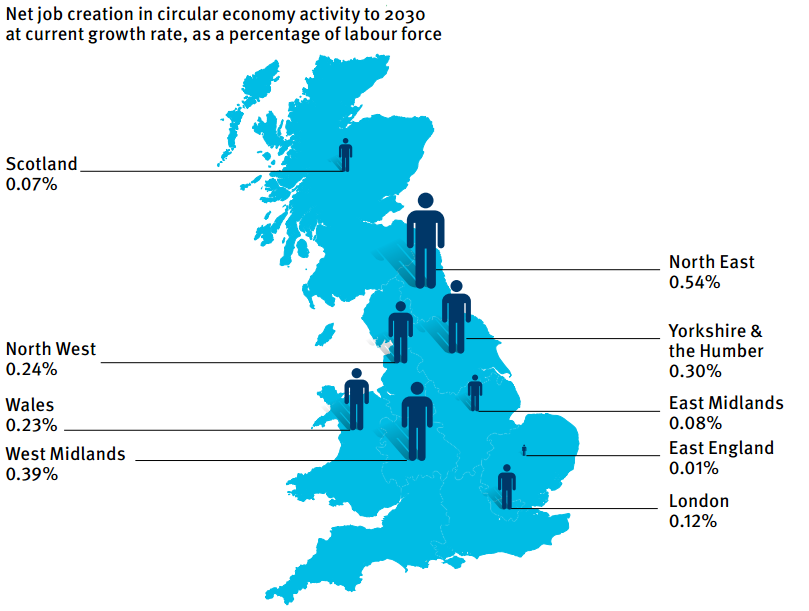 Whilst both these reports define their focus in the language of the circular economy rather than EPR, they both recognise that government investment (whether that be financial or policy) will be key to these aims being achieved. EPR provides an existing policy framework for government to build upon with a market oriented system, to allocate funding removed from Whitehall altogether.

With local authority budgets being squeezed it could offer a solution to reduce raw material costs for producers, reduce waste costs for councils and reduce the footprint of raw materials.

So how do we proceed?

In my final blog next week I will explore where we go from our current position. As I have described over these two blogs (read my first blog here - 'The Circular Economy - extended producer responsibility after Brexit'), the benefits are there to realise, whilst the costs of inaction are clear.

Next I will focus on the Producer Responsibility Regime (PRR) in the UK and how extending these regimes and filling gaps, where necessary, could help us realise the goals and achievements of the circular economy.

What are your thoughts on the circular economy? Please let us know using the comments box below!