Interim recycling figures released by the Environment Agency this morning show the UK is exceeding its quarterly requirements for recycling after six months of high prices.

Overall these numbers show that UK registered producers of PRNs have produced more than they are required to meet 50% of the annual demand. This follows six months of steadily increasing and sustained high value markets for UK producers. 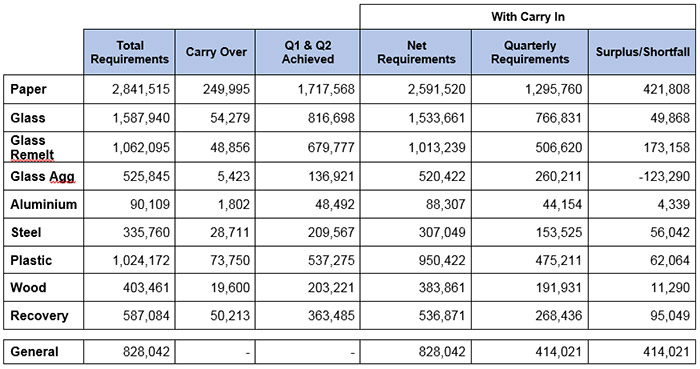 The table above shows the following from left to right: 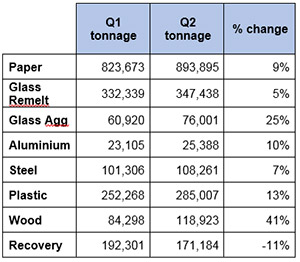 Meanwhile the table to the left shows the number of PRNs generated in Q1 and Q2 and the difference between the two quarters.

What does this mean for producers?

Plastic has had a relatively stable year but has sustained high prices since the beginning of 2018. This high level of investment into the system should lead to an increase in the PRN production numbers and the figures today confirm this. This puts the surplus against requirements between 2% and 7%. This will help to tone down fears of non-compliance in plastic. However this may not lead to an immediate fall in prices.

Q1 had similar prices and was unable to make any surplus, so a fall in price may leave the market in a shortfall for the rest of the year. The more likely scenario is that prices should remain stable and another quarter of high prices will lead to an unassailable surplus in the Q3 figures, which may lead to a fall in the price after the Q3 recycling figures are released on 22 October.

These markets have had an extremely volatile quarter. Paper has risen to decade high prices off the back of Chinese recycling restrictions and the changes in wood targets have shifted the demand for general PRNs from wood and paper markets into mostly paper markets.

The figures today show a large increase in both paper and wood recycling. When considering the general recycling requirements, these figures show the markets breaking even, if carry-over figures are taken into account, however, due to the necessity of carry in figures rolling over year on year we still have a way to go to feel comfortable in these materials. If performance continues on this trajectory it may improve and this could help to dampen further price increases, but not necessarily warrant any fall in price due to the carry over needs for 2019. Expect further increases in price, but a slower rate of increase.

Glass remelt has had a great quarter and appears to be picking up the slack in glass aggregate.  Glass remelt is the more expensive of the two PRNs and relying on this market to achieve compliance in glass could lead to slight increases in price. Also the issues in general could start to have an impact on the glass markets as schemes and producers seek to buy their general obligations in the lowest cost PRNs.

Aluminium has had a reasonable quarter, increasing its surplus against Q1. However, the level of surplus hasn’t returned to its 2017 carry in levels (around 6,500 tonnes of PRNs). This result will help to soften price increase in aluminium, but we’re not out of the woods yet.

Steel has had a strong quarter and we should have no issues for compliance. However any surplus is likely to be hoovered up for the general requirements.

Overall these figures are good news for producers. If anything they should help to stem further price rises at the current rate of inflation. As they are released in Q2, we still have half of the year to go. This means there will still be ample chance for recyclers to argue they require the high prices to maintain the level of recycling and therefore for the PRN system to achieve compliance.

However, whether or not these will lead to crash reductions in prices is to be seen. We believe it’s more likely that the prices remain for another quarter and subsequent recycling figures for Q3 period provide enough of a surplus for the prices to fall post 22 October.

If you have any questions about how these figures affect your compliance costs, please contact us to speak to our team.