Defra have released the UK WEEE collections figures up to the end of Q3, and unfortunately it looks like we are falling behind on the targets – with a considerable risk of the UK missing the national targets for a second year running.

The figures released at the end of last week continue the trend of the previous two quarters – the UK is below the expected collections at this point in the year, in every category barring category 2 (Small Household Appliances) and Category 14 (Photovoltaic Panels).

The graph below highlights the gap that currently exists between the Q3 collections and target: 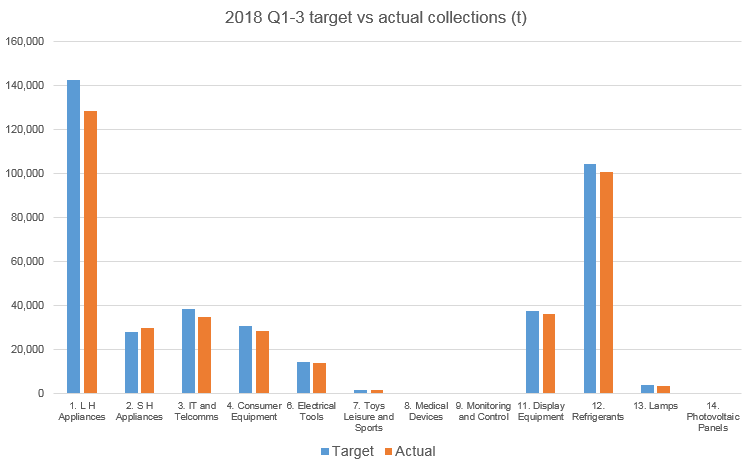 The narrative that we have seen so far this year continues – it is very difficult to say if the UK will be able to hit the targets before the year closes, though of course, with each quarter that passes it is looking increasingly unlikely.

That said, although some categories are continuing to look particularly challenging – Large Household Appliances (LHA) and IT & Telecomms are only at 68% of total annual target – Refrigerants has made positive gains in Q3. We have collected 36,777 tonnes of Refrigerants in Q3, a substantial increase when compared to an average of 31,849 tonnes in Q1 & Q2.

The table below gives a good overview of all of the categories and where we were standing at the end of September. We would hope to see all categories at 75% or above of the annual target – however we are looking at an average of 70% when all are taken into account: 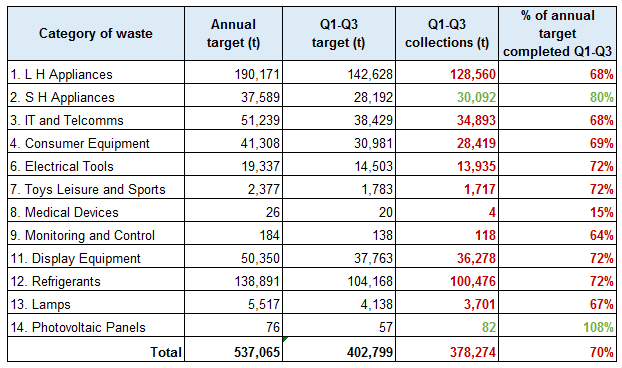 These figures ultimately endorse Defra’s decision to reduce the targets this year. However, they also highlight the continued struggle in WEEE to ensure that all of the material in the system is being captured. Based on the current figures the UK is currently projected to hit around 43-45% WEEE recycling against the placed on the market figures, which is in line with the current European targets.

It is known that there is more recycling happening than is being captured – because a good proportion of WEEE is processed through non-authorised treatment facilities. With Europe set to increase the recycling target to 65% it is vital that the gap is closed between reported/captured recycling and the actual recycling that happening in the UK. If the situation is to improve, reprocessing facilities need to be encouraged to register, report and create evidence of recycled WEEE.

The figures also demonstrate that in this weight-based system, there is an order of magnitude that relies heavily on positive performances in LHA and Refrigerants. The collection targets for the two categories combined covers over 61% of total target - poor collections in either of these categories can subsequently result in the entire system falling short. It may be time to rethink weight-based reporting.

A need to simplify the system?

Robbie Staniforth, Policy Manager at Ecosurety, stated upon the release of these figures, "Despite adjustments to WEEE targets from Defra last year, it seems that the industry are still running slightly behind for Q3, with 70% of our annual target so far accounted for.

This is concerning - it suggests some schemes may again be forced to use the compliance fee in order to hit their targets. However, it remains to be seen whether these low figures are caused by issues of material supply, or simply a failure to report.

If the latter, then the industry may need to consider ways to simplify the system to encourage more material to be reported through the regulatory mechanism. The need for 'substantiated estimates' to hit targets is sub-optimal." 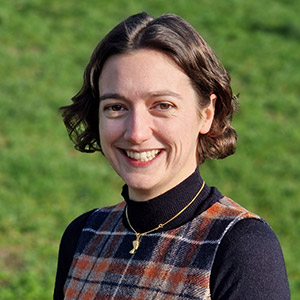