This year the annual Recycle Week event is celebrating the rise of the environmental activist - so naturally we had to take some direct action.

Recycle Week is organised by WRAP under the Recycle Now brand and is now in its 17th year, taking place on the 23 - 29 September 2019. The theme for this year is 'Recycling. It's in our own hands', inspired by the prominence of environmental activists.

We are helping to spread the word with promotional social media posts and have featured it prominently on our website homepage - even changing our logo for one week only to include the Recycle Now swoosh. But that didn't really feel like we were doing enough - yes, it was time for some direct action!

Given Recycle Week was celebrating the rise of environmental activists, it was only natural that we considered how we could encourage the people around us to directly get involved and recycle more.

And what better place to start than our very own business park, Aztec West in North Bristol, home to 100 companies and 8,000 employees? With major companies such as EE, Virgin Media, Orange, Aardman Animations, LV and Allianz located at Aztec West, we were sure it would prove to be fertile ground for the campaign.

Whilst a main drive of Recycle Week concerns plastic, undoubtedly one of the most prominent environmental issues currently in the public consciousness, we decided to focus in on the lesser known, and poorly performing, problem of e-waste.

Why e-waste? It rarely gets a mention, yet if we apply the findings from recent research by the Royal Society of Chemistry to the homes of the 8,000 employees who work at Aztec West, it indicates that there could be around 12,000 waste electricals and unused gadgets waiting to be recycled. And our own research conducted for the #BringBackHeavyMetal battery recycling campaign indicates that there could be over 50,000 waste batteries languishing in the drawers of employees houses. And that does not include all the e-waste generated by the 100 organisations who call Aztec West home! It all adds up to a staggering amount.

As the topic rarely hits the headlines, it is not surprising that many people and businesses don't go out of their way to ensure their e-waste is recycled. Often it gathers dust in a forgotten corner or at worst ends up in general waste.

With environmentally damaging heavy metals in batteries, not to mention scarce precious metals and Persistent Organic Pollutants in electronic devices, it has never been so important to capture as much e-waste as possible into the correct recycling streams.

To effectively take positive action we launched an e-waste amnesty at Aztec West during Recycle Week. This included a free battery recycling bucket for all offices, free waste electrical collections for businesses and a drop-off zone for employees to bring their WEEE from home. The big question was - would this inspire businesses and employees to dig out their old batteries and waste electricals? 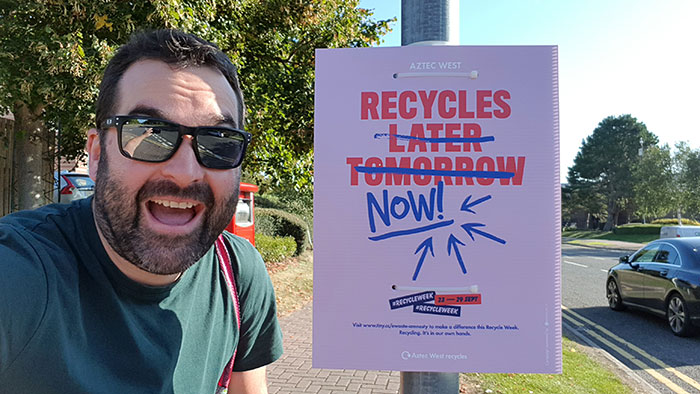 Installing the posters across the business park

The first challenge was to effectively engage the business park, so we kicked off a communications campaign with the assistance of the park manager. Hundreds of emails and phone calls helped us to reach the businesses to encourage them to check their offices and book a collection, whilst posters (recyclable Correx of course that will be turned into new signs after the campaign, thanks to Kremer Signs) were installed across the site with members of the team also getting out there to speak to employees at lunch time. 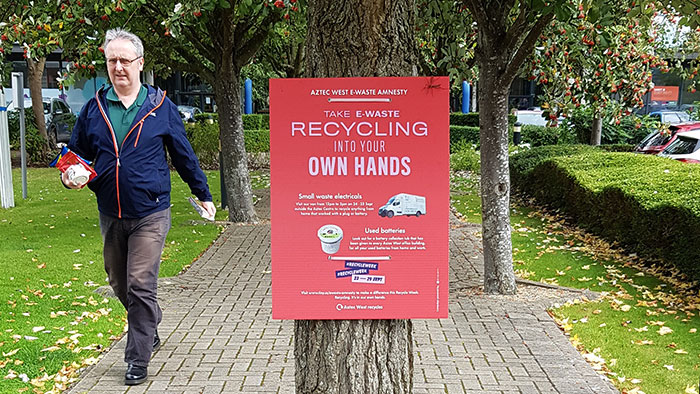 'Take e-waste recycling into your own hands'

Our team also hand delivered a free battery recycling bucket kit to every single office building, quite often to be greeted with something along the lines of "Ah great, we've got a whole drawer full of old batteries we didn't know what to do with!". Over 60 battery buckets have now been released into the wilds of Aztec West, eagerly filling with batteries as you read this. 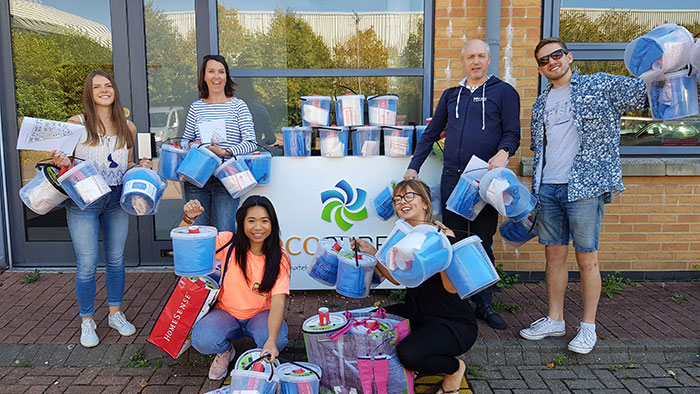 As for the WEEE collections themselves, we partnered with iWaste who undertake many of our WEEE collections for clients. Their ace team arrived with four large vans to complete all the booked collections, leaving at the end of the day with literally tonnes of WEEE. 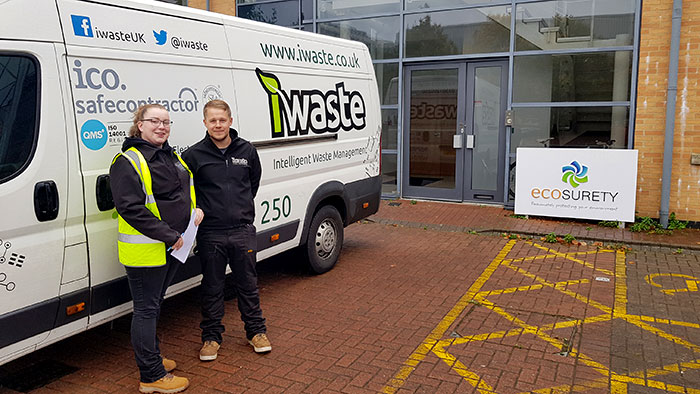 Sam and Zoe from the iWaste team

The drop off zone for employees proved to be a popular initiative too, with everything from dusty computers, VHS recorders, and TVs to broken iPhones, laptops and handheld kitchen blenders dropped off by employees happy to be rid of their waste. 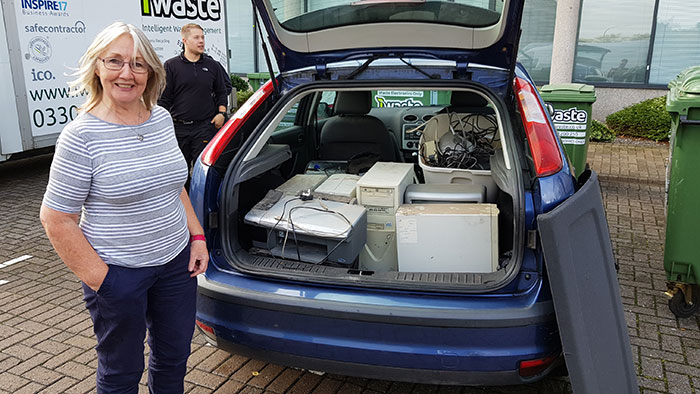 A car load of WEEE liberated by the amnesty!

At Ecosurety we are always keen to ensure that what we do makes a positive impact and that good ideas are worth a try, even if you start small to learn valuable lessons.

We certainly learnt a huge amount from the Aztec West E-Waste Amnesty, as with all our impact projects, and we hope that others are equally inspired to 'take recycling into their own hands'.

Click here to find out more about our standard waste batteries and WEEE collection services.