The end of year report published by the Environment Agency shows that the total WEEE collected in 2016 was enough to meet the UK target.

However this is not the whole story, as it does not illustrate the true impact on producer obligations or costs.

The WEEE compliance system for 2016 was reeling from a number of factors impacting the collection systems operated by schemes across the UK. These can be summarised as:

As a result, 581,000 tonnes of WEEE was collected against a target of 544,000 tonnes that on the face of it is a positive story to explain the costs of WEEE compliance to producers and to report back to the EU. However, if we look more closely into the figures there are some streams within the WEEE system that have fared better than others, hiding a story of under and over collection and dynamic markets.

We are pleased to say the impact to Ecosurety has not been negative, despite these results across the UK. Our collection systems within Small Mixed WEEE have expanded year on year as we develop more and more takeback systems with members, retailers and distributors. We are now looking to the 2017 target review (further details to be published shortly) and continue the debate with government to support setting targets that the market can absorb, whilst relying on supporting mechanisms like substantiated estimates and compliance fees only where absolutely necessary. 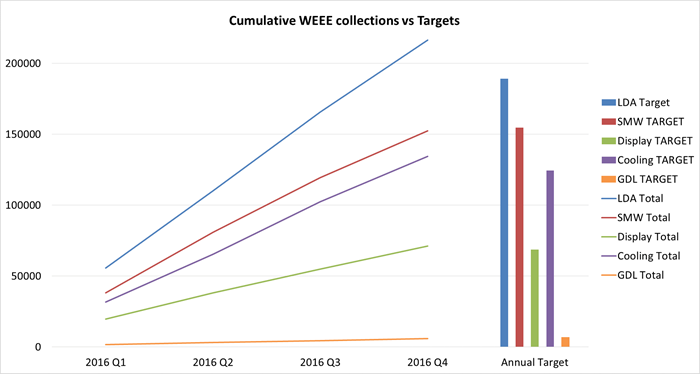 General household WEEE has always shown reasonable performance, and there was a degree of apathy in the market as to whether all schemes were going to collect enough of this traditionally abundant waste stream. With collections of IT equipment classified as household WEEE under dual use, subsidising most of the target, there was a surprise result at the end of year seeing a slight shortfall in WEEE collected.

Fortunately the compliance fee only approved a matter of weeks ago is a fall back to compliance schemes that did not collect enough, and the fee is used as intended as a top up rather than a dependency alternative to making collections. Even with this financial penalty of a more costly compliance fee, the likely total impact on the £/tonne charged to producers should not be very apparent, assuming the shortfall is spread across many schemes and their producers.

Performance is there or there about, with the shift into flat panel displays becoming predominant for EEE and WEEE. This means the declining WEEE collected target may be coming to an end, supported by the abundance of display equipment WEEE available both through the WEEE system (and paid for by producers) as well as that WEEE not aligned to schemes but paid for by end users.

Another category that is traditionally costly to dispose of, cooling equipment WEEE has been available in abundance but treatment has been difficult with limited recycling capacity in the UK. With new recycling plants soon to open, this should be short lived in 2017. In 2016 however the WEEE system served its purpose but producers are likely to have to pay for more than the collection target WEEE.

Lamps are another stream impacted by dual use, but also affected by mid-year target changes from DEFRA, additionally complicated by the big increase in collection targets in 2014 and 2015. The dynamic nature of the targets, EEE reported and WEEE arising, ultimately made for what is traditionally the most costly waste stream becoming a well sought after source of WEEE due to a stretching target.

Since midway through 2016 it looked likely there would be an insufficient amount of lamps collected, which further injected scarcity into the market and the cost of WEEE evidence, but boosted the demand for this waste, drawing it into the producer responsibility system. This is the principle on which the WEEE system should work, with targets driving WEEE into the producer funding system.

However, in this instance the target did not appear to be achievable, without the need for reliance on the compliance fee. In 2016 the 800 tonne shortfall is equivalent to a huge number of individual lamps. Again, we're likely to see rectifying targets for 2017 and the impact could have cost implications starting in 2017 with a lack of WEEE arising early on in the year.

To discuss how this news may affect your WEEE compliance, please contact our team on 0333 4330 370 or email info@ecosurety.com.