The Environment Agency has released the final quarterly figures for the 2018 packaging compliance year.

As we close out last years compliance period these figures display how the UK performed and paints a preliminary picture for the year ahead. Below, I will detail the 2018 compliance year material by material and give my opinion on the likely causes and impacts these figures point toward. First, the figures: 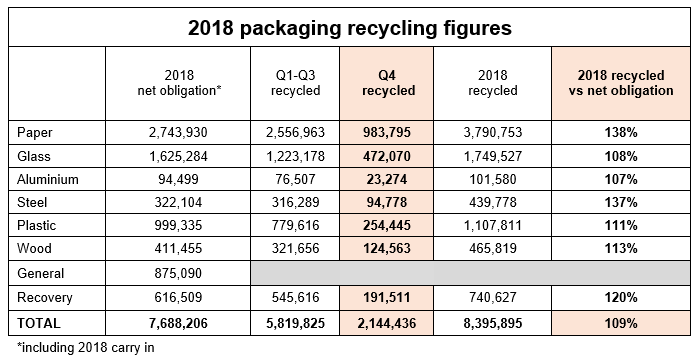 Overall the UK has met its packaging recycling target by recycling 109% of its net obligation. This means that all obligated producers should be compliant in 2018. However, 2018 was tighter than previous years meaning there are fewer PRNs ‘left over’ for 2019 (particularly in paper, steel and plastic), we call these left-over PRNs ‘carry in’. Here is how we are now shaping up for 2019: 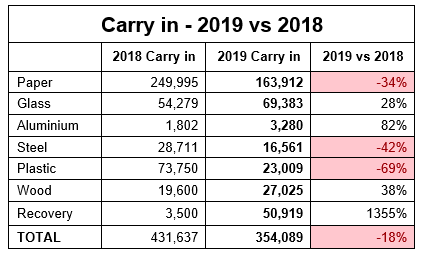 Carry in matters because if we have a drop we need 2019 recycling to increase to cover the difference, tie this in with increasing targets and price forecasting becomes more complicated. How do these carry in figures translate to pricing and what picture do they paint for the 2019 compliance year?

2018 saw the closure of export markets come to life. Falling significantly below the treatment figures achieved in the 2017 compliance year, 2018 also saw paper bear the brunt of the general obligation, which can be filled with any PRN, due to issues witnessed in other markets such as wood. This resulted in a gradually rising value for the PRN as expected supply fell short of demand.

With a low carry in the value of the paper PRN remains high as we march into 2019 and is unlikely to drop to pre-2018 levels.

Glass remained relatively stable throughout the 2018 compliance year due to the strong performance of the Re-melt market, which made up for the shortfalls in glass Aggregate. There were concerns of non-compliance during Q4 which led to an increase in value which in turn supported the recycling of more glass resulting in a bumper Q4 to take the UK over the finish line.

The carry in figure is healthy relative to last year but adjustments may be required to account for any use of glass in the general pot, should other PRN prices rise.

Aluminium got off to a weak start in 2018 due to low carry in: the result of 8,000t going unsold from the previous year, thus eliminating possibility of carry in. Healthy recycling figures have taken stress out of the market but there is a margin of risk surrounding the reliability of supply.

The 2019 carry in figure is 82% higher than last year, which if coupled with a strong Q1 may see the price soften. However, the aluminium price has not reflected the figures for several quarters, with concerns around market manipulation.

2018 was an impressive year for the steel market, which helped maintain some semblance of stability across multiple materials. However, the carry in figure was lower than expected, suggesting steel was used to fill the general pot.

The outlook for 2019 is mixed as the general pot uncertainty continues, I predict that it will largely mirror the value of paper.

Hit by the same extraneous variable as the paper market, plastic has again seen tough times. A surprisingly stable material throughout 2018 as both buyers and sellers remained cautious. Unfortunately, this did not hold in Q4 due to the risk of non-compliance posed under the Q3 recycling figures. Prices went on to reach record high levels which are reflected in the boost to Q4 figures that ensured the UK met its target.

The 2019 carry in figure raises more concerns over the future of plastic, having dropped by over 69% from the 2018 carry in. If we exclude the 2018 carry in figure, the UK would have fallen short of its target, couple that with more stringent requirements on the part of exporters and the outlook for 2019 looks difficult. A record-breaking start to 2019 in terms of value speaks volumes about what can be expected from the year, but ever the optimist, a higher price should encourage more recycling and therefore supply.

Due to a steep increase in target the initial outlook for the wood market was one of concern which quickly raised prices beyond any predictions. The high prices in the market encouraged a superb turnout from wood recyclers which helped us meet compliance and a softening in price to end the year.

2019 has already seen recyclers who historically have not gained accreditation to sell PRNs by entering the market place. This provides a good outlook on the year ahead especially when paired with a handsome carry in. The targets are increasing again however, which reduces the likelihood of pre-2018 values.

This material had another strong year and there are no concerns regarding its performance this year. There should be little to no volatility in supply or value.

In short, the UK met its compliance requirement for the 2018 compliance year, which is positive news. Certain materials such as glass, steel and aluminium continue to function well within the system barring a couple of speedbumps along the way.

If we then place plastic and paper under the microscope, eyebrows begin to rise. Record high prices, reductions in recycling rates and increased media scrutiny certainly mean that tough times may be ahead of us.

A more positive outlook spins the perception of high prices. As the UK begins to set new heights for the price of PRNs it is likely that the incentives will be greater to recycle more. It will encourage fresh entries to the market place from new and old entrants alike and greater investment into recycling infrastructure will be made possible through the greater revenues generated by reprocessors.

Greater recycling capacity and performance should lead to more PRNs and increased stability of price, which is why Ecosurety actively support and invest in innovative recycling technology, UK recycling infrastructure and recycling awareness campaigns.

To find out more, or to discuss how compliance impacts your business, please contact our team. 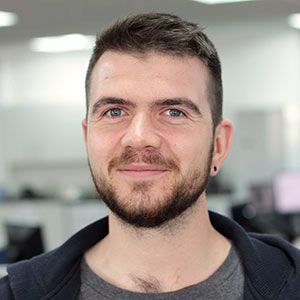 Greg joined the Ecosurety team in the summer of 2015 and now works in the role of procurement specialist. By nurturing close working relationships with key service partners across the industry, Greg helps to source and secure packaging, batteries and WEEE evidence to fulfil our client obligations.