Modern slavery – is it on your radar?

Did you know that all organisations with an annual turnover greater than £36 million need to have an action plan and annual statement detailing how they are tackling modern slavery in their business and supply chain?

The use of the term ‘modern’ distinguishes itself from historic use of the word slavery associated with the legal possession. This includes forced labour, child labour, human trafficking, and bonded labour - work demanded in repayment of debt or loan.

The required statement must be signed off at board level within six months of publication of a company’s annual reports and accounts. It must also feature on a prominent part of an organisation’s website, and contain details of the steps the organisation has taken in that year to identify and remove modern slavery from both its business and supply chain.

An individual organisation can decide on the layout and content of the statement; however, The Business & Human Rights Resource Centre have helped to set up a central Modern Slavery Registry for companies to list their statements, providing a variety of different styles to take inspiration from. 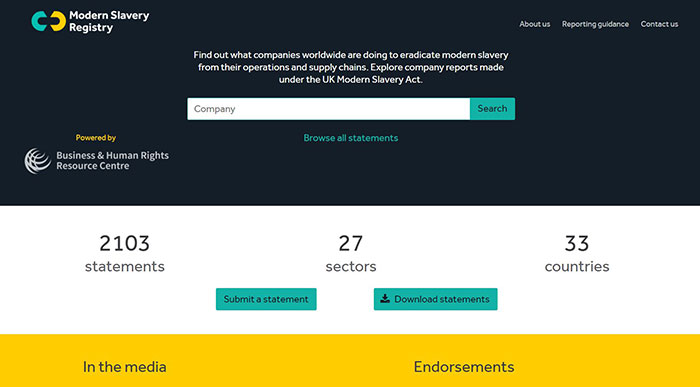 This list features more than 2,000 companies across 31 countries who have, in addition to posting on their own website, voluntarily posted their statements on the register. Some of the prominent topic trends that feature throughout the registry are impact assessments of supply chain suppliers (as well as a review of contract clauses), incorporating anti-slavery compliance into other policies such as codes of conduct, and setting up whistleblowing procedures.

Why does this matter?

Quite simply this is about protecting vulnerable people in inhumane working conditions, and increasing corporate responsibility so that consumers are not unknowingly contributing to slavery.

The estimated global figure of people who are currently victims of forced labour is between 21 and 46 million. The Home Office estimates that in the UK alone there are 10-13,000 victims of modern slavery (more info here).

The effect of companies not fulfilling their basic legal obligation could result in civil sanctions or even imprisonment of directors of up to five years; however, perhaps the more far-reaching impact in asking companies to air their laundry publically is that less consumer-conscious companies might find themselves being left behind.

Demonstrating a positive approach to accountability

There are certainly obstacles when beginning the task of assessing your supply chain. For example, there’s the financial impact of only working with suppliers you’ve vetted, potential skill gaps internally when self-policing, and the difficulty of assessing what’s happening on the ground at your suppliers’ sites. 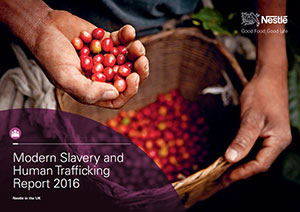 However, non-compliance of this obligation could, even without legal action, change how brands are perceived. According to a 2014 report from the International Labor Organisation, forced labour in the private economy generated $150billion in illegal profits annually despite 124 of 161 countries criminalising human trafficking. How would you feel if you knew your organisation was involved in this?

The world’s largest food maker, Nestle, had exactly that scenario when they released information in 2016 that they had found forced labour in the Thai seafood industry. One of the world’s largest brands demonstrated a positive approach to their accountability, and through proactively bringing this to light they were able to avoid a catastrophe.

We’re pleased to acknowledge that although Ecosurety is under the threshold for the Modern Slavery Act, we will be voluntarily offering a Modern Slavery Statement in the near future for our members’ piece of mind. The reasons for doing so are clearly explained by our managing director, James Piper:

“Despite the fact that Ecosurety is not obligated by law to produce an annual statement under the Modern Slavery Act, we will be voluntarily doing so, simply because it is the right thing to do.

Our business has extensive supply chains and partnerships with many organisations who are carefully vetted to ensure they align with our own core values and ethics, and we welcome the opportunity to publicly, transparently and regularly report on this. Slavery in any form is abhorrent and any action we can take as an organisation to combat it - and influence others to do the same - must be taken.”

Please comment below with any feedback you have - is your organisation voluntarily acting on this too, even though they fall below the threshold?