The Department for Environment, Food and Rural Affairs (Defra) has released experimental statistics estimating carbon emissions from household waste between 2016 and 2020.

This move marks an important shift for government to possibly consider using carbon impact as a metric in the future to measure performance in managing England’s household waste, instead of relying solely on weight-based targets.

The figures are consumption-based estimates of the impact of different materials contained within waste following treatment by recycling, incineration for energy from waste (EfW), and landfill. Defra says the estimates, which were produced using the Carbon Waste and Resources Metric (Carbon WARM), are a work in progress and that the methodology and outputs would be updated in future editions of its notice.

The Carbon WARM factors are a set of conversion factors produced by WRAP for Defra, and are designed to enable users to express waste management tonnage data regarding their Greenhouse Gas emissions relative to landfill.

Although figures reveal an overall decline and an average of 697,000 tonnes of carbon saved annually over the last five years, Defra notes a 0.5 million tonne increase in carbon emissions during the pandemic, due to disrupted waste collections at kerbside and increased tonnages of residual waste generated by households.

The Carbon WARM methodology reveals that total or overall emissions from household waste are the sum of emissions from waste management by landfill, EfW, composting or Anaerobic digestion of organics and recycling. The figures show that changes are driven by the weight of waste collected and changes in waste treatments. 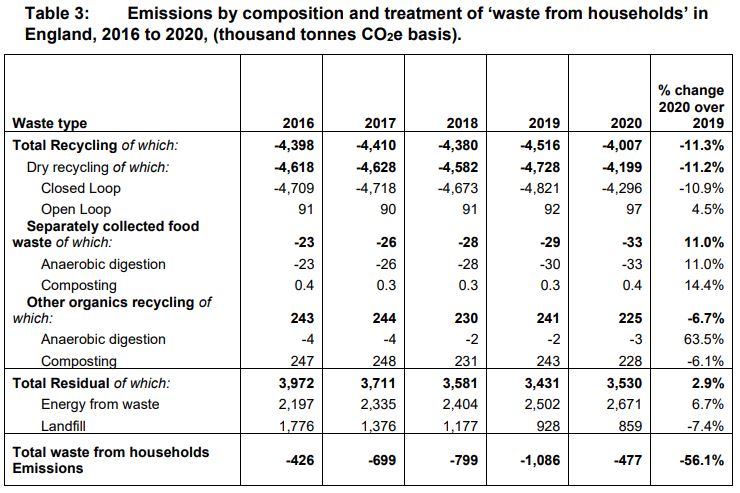 Total emissions household waste in England were at a peak in 2016 at -0.4 million tonnes carbon dioxide equivalent (CO2e) and at their lowest in 2019 at -1.1 million tonnes CO2e.

Emissions from other organics (garden and mixed garden and food waste) over the years are steady at around 240 thousand tonnes CO2e. Changes between years are a result of climate and growing conditions. They were at their lowest point in 2020 as the COVID-19 pandemic affected collections.

Dry recycling emissions across the years are steady at around -4.6 to -4.8 million tonnes CO2e. They decreased to -4.2 million tonnes in 2020 as the COVID-19 pandemic disrupted waste collections.

Commenting on the statistics, Ecosurety Policy advisor Louisa Goodfellow, said: “Weight based metrics are often rightly criticised as being too blunt, so we are pleased to see Defra starting to use more sophisticated carbon measures to demonstrate the true impact of treating household waste. Although the experimental statistics will need to be refined in the future, we hope they will become the norm when gauging carbon savings and measuring the success of reforms such as EPR for packaging.”