Packaging recycling – the long view to 2023

These figures will, as always, have an immediate impact with prices likely to rise or fall dependent on individual material market nuances. However, taking a long-sighted view of these figures is more important than ever, with significant changes likely in 2023.

Of immediate concern will be the difference in the surplus of PRNs issued (some of which can carry over and be used in the next year) compared with previous years. The table below shows a reduced amount in paper, steel and plastic, potentially meaning the country will find the 2019 targets in these materials a challenge. Conversely, the outlook is much rosier for glass, aluminium and wood. The high prices through 2018 seem to have stimulated a much higher excess in PRNs issued.

These high prices have genuinely supported UK businesses, and delivered greater recycling in these materials. The reliance on the export market means the same cannot be said of paper, steel and plastic.

The ideal scenario would be for all producers and their compliance schemes to now support efforts to increase overall UK reprocessing capacity in paper, plastic and steel over the next few years, as Ecosurety are. We have had recent success for wood and glass, which could easily be replicated with a concerted effort.

There has been a recent trend of greenwashing in the PRN industry, where producers claim to have procured “100% UK PRNs”, without adding any additional capacity to the overall total. The reality is that this just displaces UK PRNs from another producer and doesn’t equate to a genuine impact on UK infrastructure, further reinforcing the need for change.

Looking ahead to future targets

The government are currently consulting on increasing the packaging recycling targets further in 2021 and 2022 (see yellow and green bars in chart below - the figures in orange represent the 2019 targets).

The much steeper increases proposed will be a challenge for the current PRN system to meet. It appears that the government are looking to maximise the benefit of the current system to support greater recycling before it is modified in 2023, when new legislation is likely to be introduced. 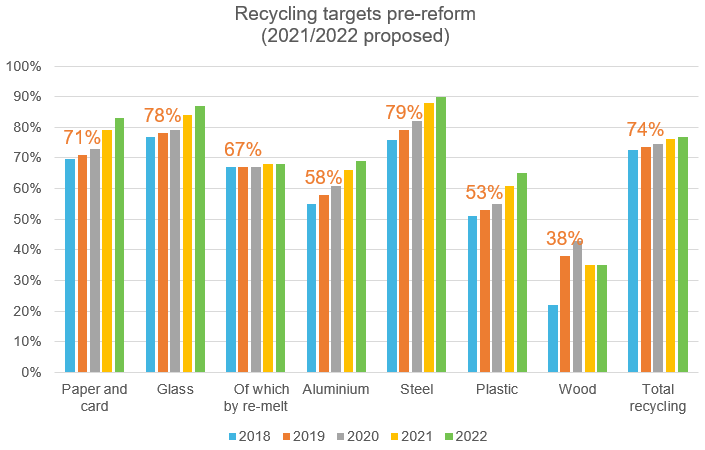 This could equate to higher PRN prices in the medium term (up to the end of 2022) for packaging producers. The government’s recent assessment of the PRN system stated that it only covered 7% of the full net cost of packaging recycling. This figure increasingly looks to be an underestimate, given the higher than usual PRN prices already experienced in 2018.

However, the fact remains that producers have been targeted for much steeper fees in future. The sympathy for high PRN prices over the next few years, while producers are still deemed to not be meeting the “full net cost”, may be limited.

However, this begs the question, how do we limit fraud, given the current constraints outlined by the National Audit Office? Experience tells us that when PRN prices reach a certain level, the temptation for making a quick buck at the expense of producers increases. Ecosurety has helped to bring the export of waste packaging into sharp focus over the last few years and concerns remain, especially when prices are high.

On the one hand, the government could be lauded for their optimism with the targets they have proposed. On the other, it could demonstrate there is still a lack of understanding of the system and naivety about the consequences of setting high targets.

Remember the government’s own impact assessment in 2017 claimed the PRN system was “fit for purpose”, yet here we are 18 months later with the whole system due for reform. Perhaps any target increases should be conditional, based on greater funding for the devolved enforcement agencies.

What should we do?

It will be hard to make a case for lower recycling targets than those the government propose. As the compliance scheme leading the way on improving the system and delivering better environmental outcomes, it would be tempting to support these high targets and merely cross one’s fingers and hope for the best.

However, life is rarely black and white, with just under 10 weeks until the consultations close, I think we’ll be navigating through more than just 50 shades of grey.

To find out more about the impact Ecosurety is making to improve UK recycling, please click here.