Despite forthcoming Chinese recycling restrictions, plastic recycling figures have exceeded expectations and show a record amount of PRNs and PERNS were issued during the Q3 period.

The 10 year high prices that we've witnessed in Q3 appear to have pushed a record amount of tonnage through the market. However this growth was found in the export markets, not the UK recycling market, suggesting that exporters have had a final push before the Chinese recycling restrictions come into force. The table below details the tonnage requirement per material for the remainder of the year.

The graph below illustrates that although the UK increased its output by around 25,000 tonnes in Q2, it appears that the overall performance for 2017 has, and still is, been driven by export forces. 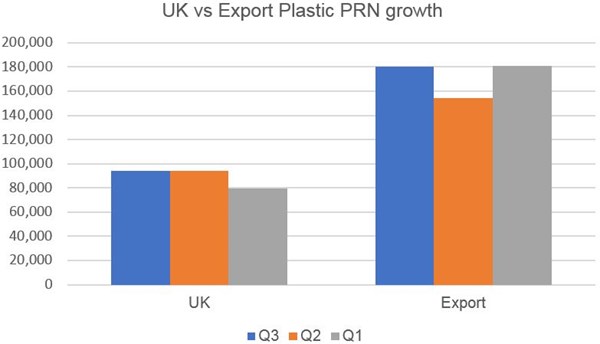 Commercial manager, Robbie Staniforth added “We’ve taken a cautious approach in 2017 due to the issues caused by China’s change in policy. There have been conflicting views offered across the industry on the likely impact to recycling volumes this year. We’re pleased to see good figures for Q3, which will result in a reduced average plastic PRN price for our members."

"While we can be more optimistic about 2018 on the back of these figures, the picture for plastic remains unclear with lower market confidence compared to this time last year.”

The first official figures that will impact 2018 will be the carry in figures for 2017 Q4. Carry in PRNs are generated in December and can be used for 2017 or 2018 compliance. Each year we start with a surplus left over from the previous year which acts as a cushion to the next year - the larger this cushion, the better.

As the shipping of plastic waste takes several weeks, it is likely that the first impacts of the 2018 ban will be felt in Q4 2017. With a fall in price, the incentives for expensive export recycling have been cut. This could lead to a reduction in PRN production in Q4, which although would ensure we meet compliance for 2018, could curtail the levels of carry in for 2018.

The impacts of the Chinese recycling restrictions are likely to be harsh, however, the impact this has on plastic PRNs for 2018 is still an unknown.

What can we do about this?

These situations are caused by our over-reliance on exporting our waste for recycling. Whilst operation National Sword provides a headache in the short-term by increasing volatility, it provides an opportunity for the UK to drive investment into its domestic recycling industry.

Throughout 2017 and 2018, Ecosurety is working with key stakeholders, including both producers and reprocessors, to drive investment in UK recycling infrastructure through the allocation of PRN revenue. To find out how you can get involved, please contact us on 0333 4330 370.