Resource and Waste Strategy reform - what we hope to see

As MD of the UK's leading compliance scheme making a positive impact on recycling, I have long been vocal about the need for reform in the industry. So, what does the upcoming Resource and Waste Strategy need to deliver?

In 1977 the first glass jar was dropped into a UK-based bottle bank. In the convening 41 years, the UK has built up a recycling sector that reprocesses an estimated 71.4% of its packaging. Initially dealt with on home ground, recycling exports increasingly became the solution to our growing quantity of waste. Last year over half of our recycling was exported. In 2016 over 50% of our plastic and 75% of our paper recycling exports went straight to China.

Confronted with its own growing recycling demands, in January China stopped importing foreign recycling. This sudden change in our most-relied-upon recycling export route quickly escalated into a crisis. The UK was suddenly competing with other western countries also trying to find new export markets for recycling waste they didn’t have the capacity to deal with. New locations such as Thailand, Malaysia and Turkey were established.

It was assumed an out of sight, out of mind approach could be re-employed. The focus remained on hitting targets rather than guaranteeing the environmental credentials of our own export chains.

That was until The Daily Telegraph reported that recycling from councils in the UK is being disposed of in illegal Malaysian dumps rather than being recycled. Though this wasn’t the first story to emerge on the subject (Sky broadcast an excellent documentary back in January, pictured below), it became part of a media campaign to expose the UK’s recycling export market as an area that is deplorably monitored and in urgent need of attention and reform. 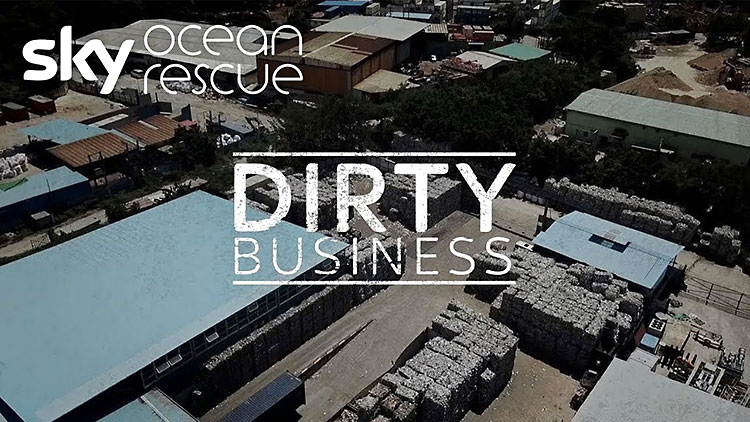 We need a fair and level playing field

Reform, we hope, is on the cards as the Government’s Resource and Waste Strategy is expected before the year is out. As MD of a compliance scheme that has actively campaigned for market reform, what issues do I hope it will address? How can the UK save itself from the most shocking recycling exposé we’ve ever had to deal with?

"The core problem lies in our existing PRN system. Despite its best intentions, it has failed to ensure UK recycling infrastructure has been allocated revenue for innovation and growth."

Instead of building the UK’s recycling capacity, it has restricted it, with most of the growth being channelled abroad, financed by PERNs (export PRNs).

We need a system that creates a fair and level playing field for PRNs. Currently the UK PRN market is in direct competition with the PERN market. Thanks to inadequate export checks, opportunity for fraud and deception has been taken advantage of. Though one PRN or PERN is purchased in return for one tonne of recycling, exported recycling is of a far lower grade than the recycling dealt with by reprocessors here in the UK. As such, the system has unfairly favoured exporting waste and our own recycling infrastructure has been deprived of revenue to enable it to grow in line with our own recycling demands.

Tackling a lack of transparency

We also need the Waste Strategy to tackle a lack of transparency. Recognising over half our recycling will continue to be exported for the immediate future, Government must ensure a robust system of environmental checks and auditing are put in place to guarantee PERNs and PRNs are equal in credibility. If anything, PRNs should be favoured over PERNs, thereby giving more incentive for producers to invest in the UK, if only there were enough to go round.

"Price volatility is another key issue - 2018 has seen PRN prices soar to levels never seen before. This dramatically affects producers and consumers to whom the costs are ultimately rolled down to."

Our cash-strapped councils are also struggling to meet the demands of volatile PRN prices. A word of caution, however; knee-jerk efforts to clamp down on fraudulent exporters must be thought through carefully. As we have already seen, sudden closures of recycling exporters sends PRN prices rocketing through anticipated drops in availability. This will increase the likelihood of producers and compliance schemes buckling under PRN costs and failing to provide end of year certificates of compliance.

For many years I’ve urged CEO’s, MD’s and Sustainability Directors to recognise that recycling compliance doesn’t need to be perceived of as a tax but as a form of reinvestment. Under this proposal Ecosurety allocate a percentage of the PRN price towards investment in innovation, education and infrastructure in the UK recycling sector - all aimed at increasing the number of available UK PRNs. Without efforts to increase the number of PRNs in the UK, producers are doing little to help build the UK’s recycling industry.

"Producers can claim to source all their PRNs from UK reprocessors, however, without actively making efforts to add new PRNs to the ‘pot’ they are simply taking away UK PRNs from other producers. They have not caused any extra investment to flow into UK recycling infrastructure."

We need to recognise that the more PRN’s we produce, the greater our recycling capacity. The greater our capacity, the less we rely on exports and the less waste goes to landfill.

An opportunity for change

The reality is that years of favouring exported PRN’s will likely be borne in the form of higher costs for everyone; producers, local authorities and consumers. 2018 has been a turbulent year for the recycling sector. Yet we should see it as an opportunity for change.

The Government recognises the existing system is broken. Let’s hope that the upcoming Resource & Waste Strategy will move our system towards a functioning circular economy. We all need a recycling industry fit for the 21st century. We’ve got the drive – the Government now just need to provide the direction.

Click here to find out more about how Ecosurety is working hard to improve UK recycling and increase UK PRNs.

James Piper is a non-executive director of Ecosurety, having previously taken on the role of CEO for nearly five years when he was now focused on leading the development of new products and services that not only benefited producers, but helped to drive change for good and a positive impact on UK recycling.