The batteries directive across Europe

Across Europe, battery and accumulator producers are, one way or another, required to fulfil an obligation in line with the Batteries Directive.

This obligation usually includes financial and organisational responsibility in regards to the collection, treatment, recycling and sorting of waste batteries. Batteries that are not properly collected and recycled increase volumes of waste resources and the risk of releasing hazardous substances into the environment. With approximately 1,150,000 tonnes of automotive, industrial and portable batteries entering the EU every year, control over where they end up is essential.

This article contains a summarised analysis of the performance of European countries against the Batteries Directive requirements.

With the 2016 EU collection target for portable batteries set to be 45%, concerns regarding individual countries and the EU as a whole receiving this target are prevalent. The EU has made a substantial improvement in increasing the collection rate as a whole, accomplishing a collection rate of 40% in 2014, up from 25% in 2010 (Figure 1). Collection efforts have increased by 54% in terms of weight or 50% for units of batteries in this period. 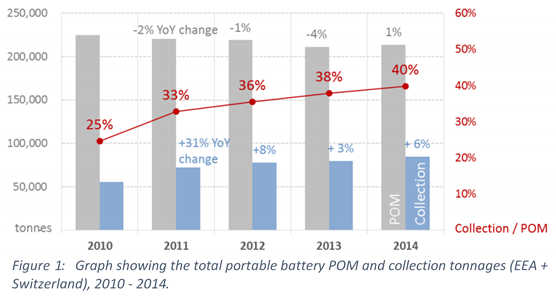 Described as “ambitious but achievable” by the European Portable Battery Association (EPBA), the target looks attainable from Figure 1, but 75% of these batteries ‘placed on the market’ (POM) and collected are being accounted for by only 6 countries - Germany, UK, France, Italy, Poland, and Spain - out of the 31 making up this data (EEA and Switzerland).

This can be seen clearly in Figure 2 which shows the POM and collection volumes of portable batteries and how much they contribute to the EU total. 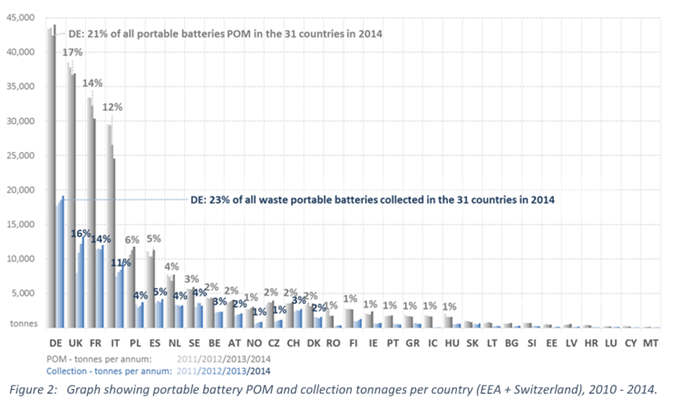 The fact that these countries are the largest contributors is largely because together they make up approximately 70% of the EU population, meaning that if one of these countries were to have a bad stretch of collections, the collection rate for the whole of the EU would suffer.

This is likely due to the differences in the collection infrastructure between the two countries. Iceland handles the financing of battery collections by charging a fee at the customs on import (Recycling Fund) which is used to finance batteries waste management. A batteries register, where the producers were to register and report never materialised and batteries included in EEE are not subject to registration obligations, meaning that POM volumes reported may not reflect what was actually placed on the market.

Conversely, producers in Sweden are a lot more involved (and have been since 1997), having to organise and finance collections through a batteries and WEEE compliance scheme, El Kretsen, or individually (for B2B). This encourages the producers to have more responsibility for their POM volumes and collection and also for consumer awareness measures. 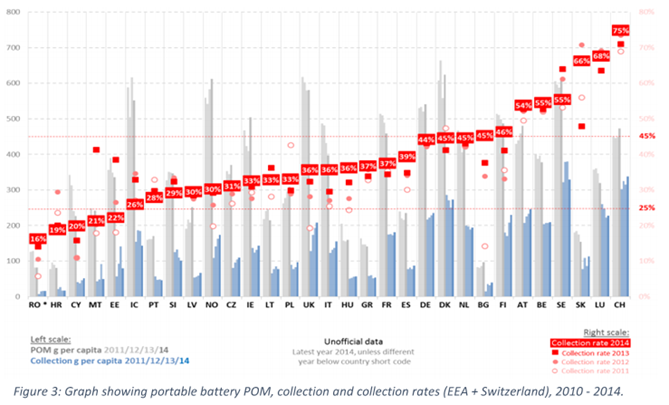 It’s important to note, especially as it can be seen clearly on this graph, that Austria, Belgium, Germany, Sweden and The Netherlands have had collection and recycling systems in place before the Batteries Directive was implemented and so have had more experience of these processes. Their rates of collection between 2011 and 2014 are consistently high, most of them reaching the 45% target in 2011. This is likely due to two main reasons;

Collections also struggle with hoarding and the increasing incorporation of longer life batteries in EEE which are not always separated out.

Most would think that the financial obligation on producers would be a dominating factor influencing the efforts to affect collection rates. However, whilst observing the average fees paid by producers per tonne of portable batteries against the collection rates of different European countries, it is obvious that the cost of compliance neither encourages nor disheartens the collection efforts. As there is no relationship between these factors. 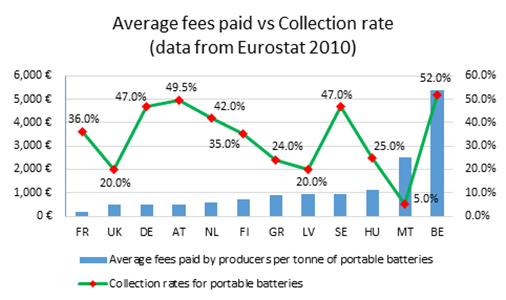 Recycling and waste to landfill

The benefits of recycling the metals in batteries is significant - recycled cadmium, nickel and zinc require 46%, 75% and 73% less primary energy respectively than extracting and refining virgin metals from ores. A major downfall to batteries being sent to landfill and to incinerators is that they release harmful substances into the soil, ground water, surface water and air. We as humans, and all sorts of other animals, then in turn consume these substances through food and drinking water, causing a wide spectrum of health problems and adverse changes to ecosystems.

Luxembourg, Norway, Switzerland, Denmark, and the mature countries mentioned above all have high recovery rates due to bans or a low threshold on waste going to landfill. This makes sense since there are fewer destinations for the waste to end up and makes it difficult to fairly compare each country’s performance. But the destination that these countries are favouring for general waste is incineration. If batteries are not collected and separated properly, they may end-up being incinerated despite the incineration ban on automotive and industrial batteries. This shows the importance of public participation and getting consumer information about collections wide spread.

Have you noticed the trend yet? In every way that the compliance performance of these countries is analysed, there are discrepancies, anomalies and exceptions making it very difficult to compare them and come to conclusions. The only conclusion that I have come to is that there needs to be more clarity in terms of what producers and countries can and cannot do to reduce their waste. There doesn’t necessarily need to be more legislation and regulation, just a more concise guideline, defined terms and maybe reasons why it’s important.

Although it’s clear that most countries are increasing their efforts to reduce their battery waste, at the moment it seems to be that each country has different interpretations of the Directive and therefore, is not being held accountable for their harmful output (incineration) and has no incentive to design better, economical products with longevity.  The grey area created from the vagueness of the Directive allows for countries to interpret the laws in ways that may be for their own financial benefit and not for the welfare of the environment.

If you are selling into the EU, there is a chance you could be obligated in other countries. If you have any queries regarding your batteries compliance in the UK, or in the EU, please don’t hesitate to contact our team of specialists on 0845 094 2228 or info@ecosurety.com.