Figures generated on the NPWD website show some interesting results, if they turn out to be correct once validated by the Environment Agency.

After a positive start to 2017, this could be more good news for the UK as it appears recycling has increased. Comparing the total amount of PRNs issued across all packaging types, it looks as though over 100,000t more PRNs have been issued this year compared to the same period last year, with several major recyclers yet to report. 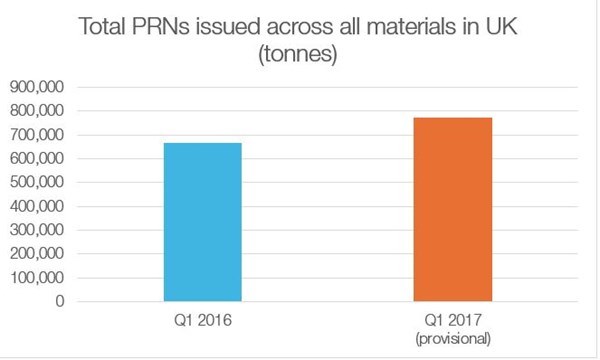 While it is important not to look too closely into these figures as the report is automatically generated and could contain data entry errors, it is interesting to see the amount of plastic that has been accepted or exported. The plastic export problems widely reported in Q1 may not have had as significant an impact on figures as anticipated. The figures suggest a 38% increase in the amount of plastic exported when comparing Q1 2017 to the same period last year.

The picture will become clearer through the course of May, once official figures are released. However, as an early warning indicator, it looks as though packaging recycling is increasing in the UK.

To discuss how this news may affect your packaging compliance, please contact our team on 0333 4330 370 or email info@ecosurety.com.