The WEEE collection figures released by Defra at the beginning of March reveal that the targets have been missed yet again.

In line with the quarterly reports that have been released throughout 2019, highlighting that UK WEEE collection rates have been far below those required, the final annual figures show that not a single category of WEEE has met its annual target.

The previous Q3 collection figures showed that collection rates were only 68% towards the target when they should ideally have been around 75%. This shortfall was not met in the last quarter of the year. 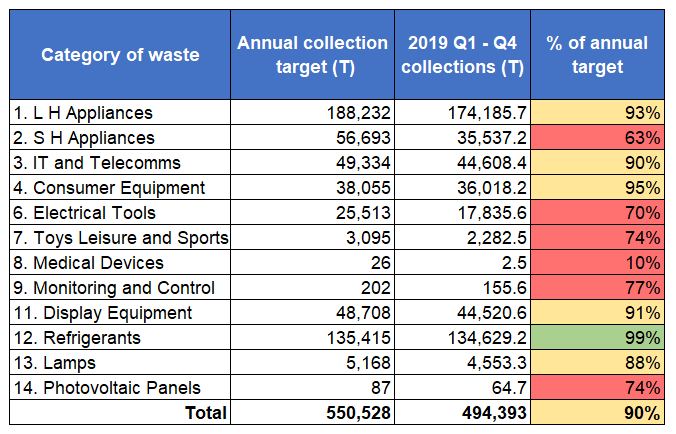 The worst performing categories are no great surprise, with Small Household Appliances achieving only 63% of its target, a deficit of 21,155 tonnes. The categories for Electrical Tools, Toys, Sport and Leisure, Monitoring and Control and Photovoltaic Panels were also particularly poorly performing.

In 2019 the UK collected just under 2,000 tonnes more than 2018, but this marginal increase of less than 0.4% was nowhere near enough to get the collection rate across the line. Coupled with an increase in the overall collection rate for 2019 of 13,463 tonnes compared to 2018, the gap between target and collected has actually widened in 2019. 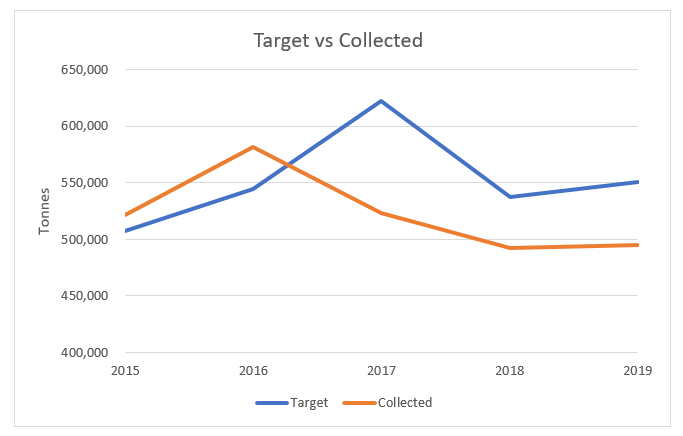 Such a shortfall in collected WEEE means that compliance schemes will again be forced to rely on the compliance fee, a mechanism that allows shortfalls in evidence to be made up by a payment into a central pot of money that is controlled by the WEEE Fund, with the aim of using the money to improve UK collections. In 2017 and 2018 the WEEE Fund generated £10.6 million, an indication of just how much schemes are forced to rely on the mechanism.

There is some hope for WEEE collections however, with a recently released government review of the regulations highlighting the various shortcomings and a government consultation expected later this year.

Robbie Staniforth, head of policy, commented “I think it was Einstein who said the definition of insanity is doing the same thing over and expecting a different result. The Government again set a challenging target and again it was missed, showing that amount of WEEE recycled is now decoupled from targets.”

“No one in industry will be surprised by these results. The compliance fee, producer balancing system, target-setting and WEEE fund are all necessary evils, rather than a well thought out policy framework. It is heartening to see the policy wheels starting to turn in Government as only a change in legislation will restore sanity to this industry. We’re hopeful that it will be third time lucky for the WEEE system as we can learn from the mistakes of the previous two versions of the regulations.”

Ecosurety have a comprehensive UK-wide WEEE collection service which can be accessed via an online form. Request a collection now by clicking here.